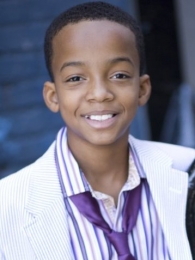 Coy Stewart is no stranger to the fans of Talent INC. After completing his development and performing in the Talent INC Showcase, Coy won Overall Child Actor and proved he had a big future ahead. Shortly after, Coy signed in both the Los Angeles and New York markets and booked one of his biggest jobs on the TBS sitcom Are We There Yet.

We are happy to announce that Coy was also just booked as a guest star on the hit Disney Channel show, “Good Luck Charlie.” Coy’s first appearance is scheduled to air on July 14th. He had a great time on set with the cast and looks forward to working with them in the future. Congratulations Coy!! We are so proud of you!

Good Luck Charlie is an original Disney Channel television sitcom, which premiered April 4, 2010. The series was created by Phil Baker and Drew Vaupen, who wanted to create a program that would appeal to entire families, as opposed to children only. It revolves around a Denver family, the Duncans, as they try to adjust to the birth of their fourth child, Charlotte “Charlie” Duncan (Mia Talerico). In each episode, Teddy Duncan (Bridgit Mendler) creates a video diary containing advice for Charlie about their family and life as a teenager. Teddy tries to show Charlie what she might go through when she is older in the video diaries for future reference. Each video diary ends with Teddy (or someone else from the family, even Charlie) saying the eponymous phrase, “Good luck, Charlie.”
Source: www.imdb.com, “Good Luck Charlie”